Yep, we've been working on the Virago again. Started of by going to the deep south of our country, Brabant, which is almost Africa, for a new starter motor. So we finally have a working starter motor again now. We quickly adapted the side stand so it doesn't have to lean on a block of wood the whole time and fired up the bike. The exhaust system with rings that worked so well on the Suzuki worked marvelously on the XV too. It runs better on both cylinders now we have restricted the flow in the much shorter rear exhaust.

We had hoped to take it for a first decent test ride and although I (for some reason it's always me who has to do the first ride, tells you a bit about the confidence Vincent has in our building skills) broke the previous record of 5 meters, the final 7 meters weren't very impressive. The bike kept dying after running for roughly 20 seconds. It did that every time, very annoying. We excluded fuel and battery problems, but we're not sure yet what the problem is.

After draining the battery in all the attempts we took it back into the shed and did some other vital work (like making a whole new throttle set up, the old one was CRAP and we didn't have very much control over the revs). All in all a mixed result. No test ride yet, but in the end we did have the feeling that we made progress.

The carburetor that caused so many problems yesterday: 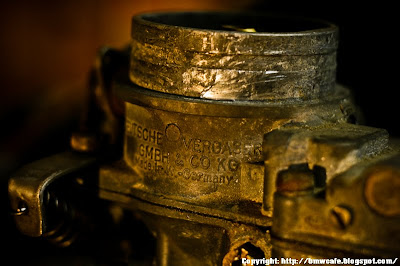 The exhaust fumes were getting to someone's head while trying to do a test ride: