One bike in the bike show did get my vote, but did not win: Roel Scheffers' Suzuki GS. Why it got my vote? I think it's brilliant. It not only looks fantastic, it's another one of those designs that make you wonder what the builder has been smoking. Who in the world would think of putting KTM fairings on an old GS?!? And the home build fuel tank containing the battery..... Sweet!

He did pretty much everything himself (except for the pin striping). I borrowed some photo's for this post from fotoduda. He makes great photo's, check it out. 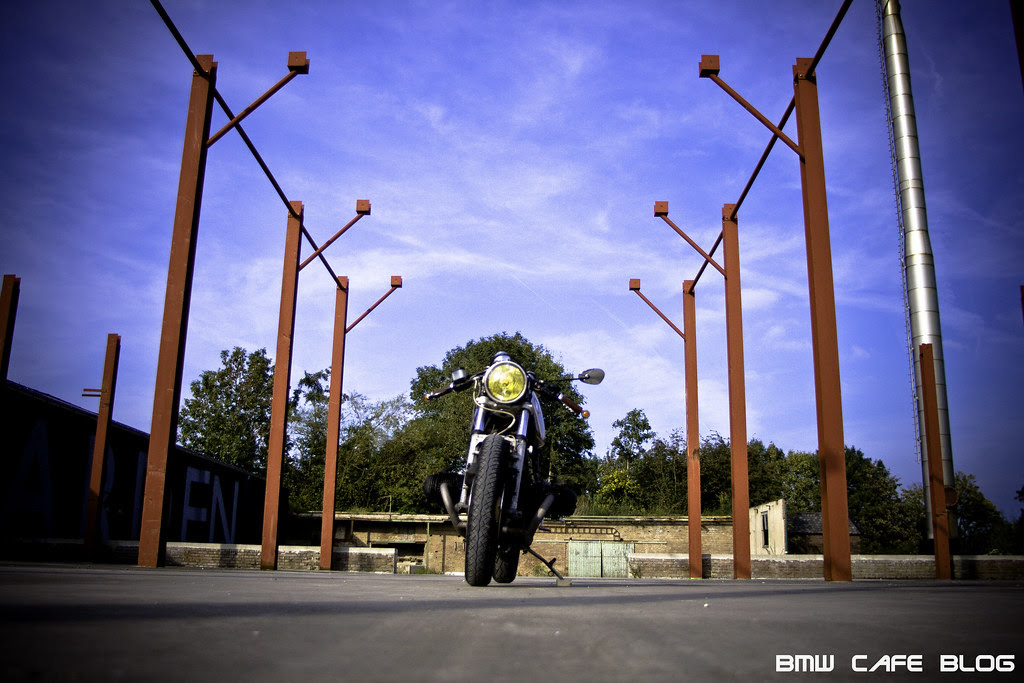 The BMW made it to BikeExif and I feel very honored. A short introduction for all the visitors coming here via BikeExifs. These are the other builds on this site:

CX500 chopper. Build together with the guy from DesmoMeister: 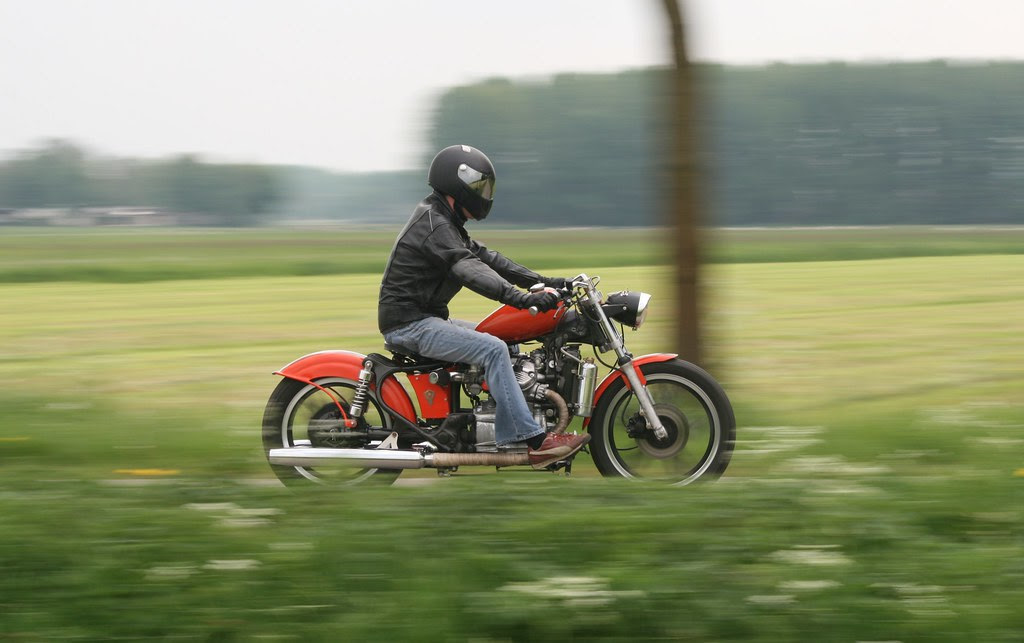 CX500 I build for my Girlfriend: 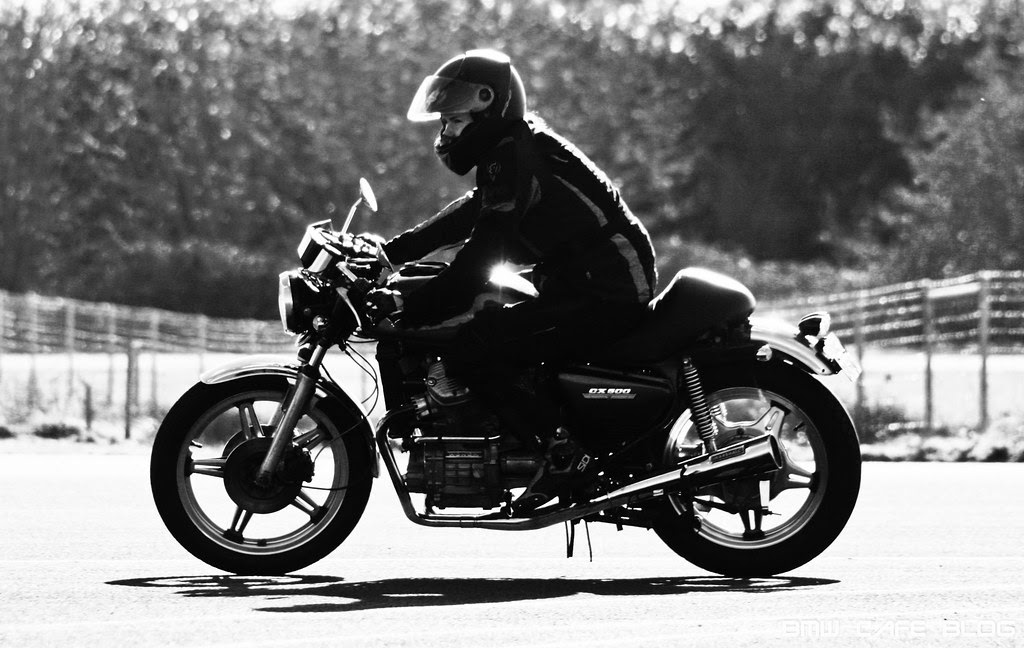 Suzuki SP370 which I sold a while ago (good thing I did, it was not the right bike for me): 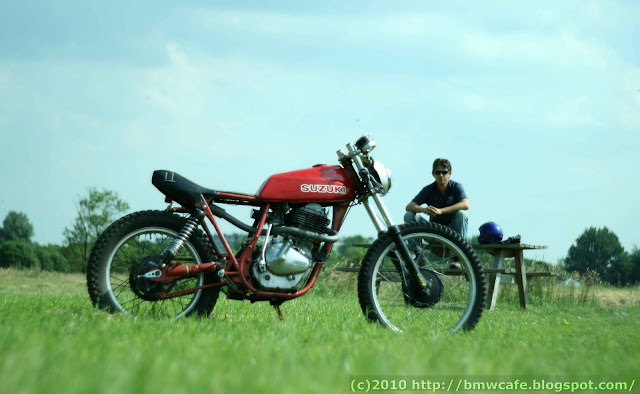 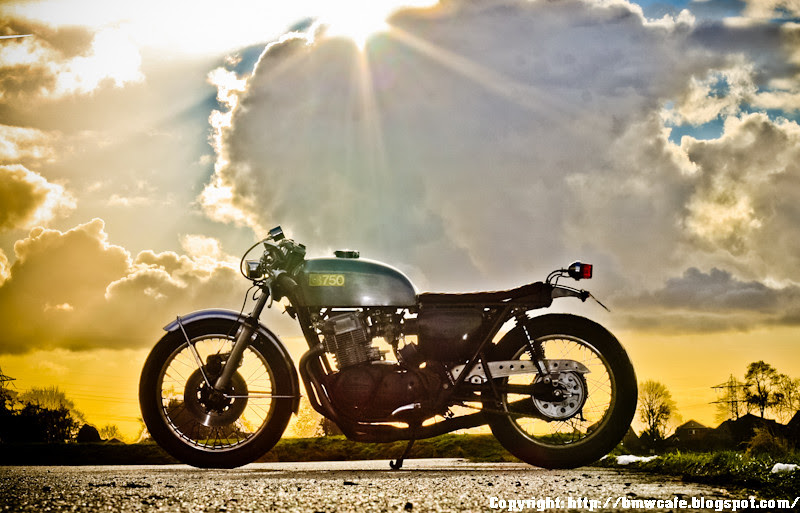 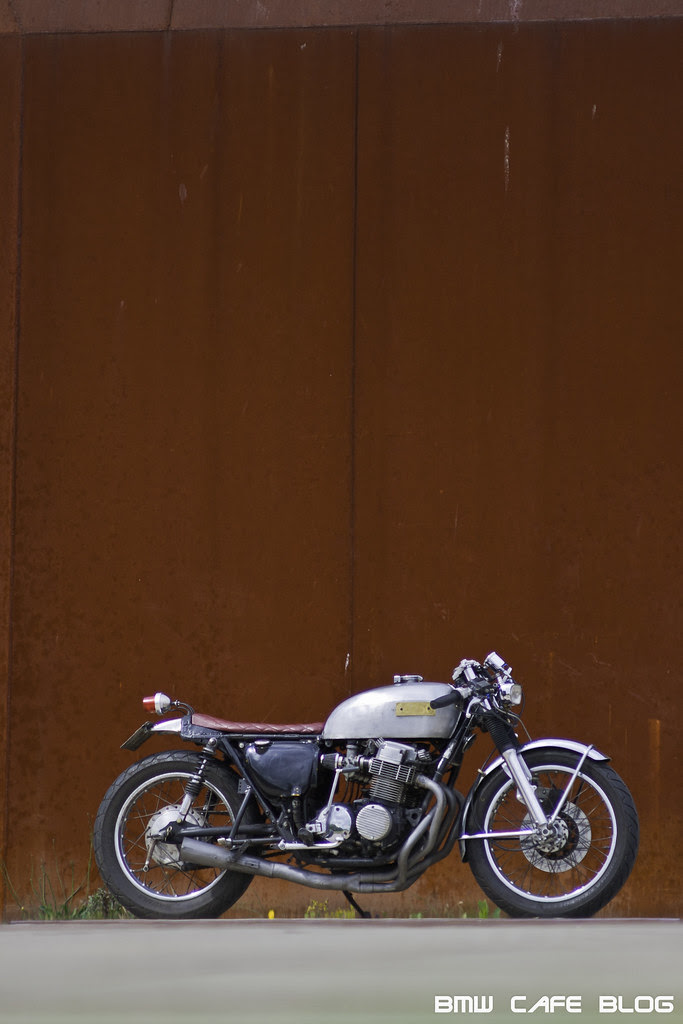 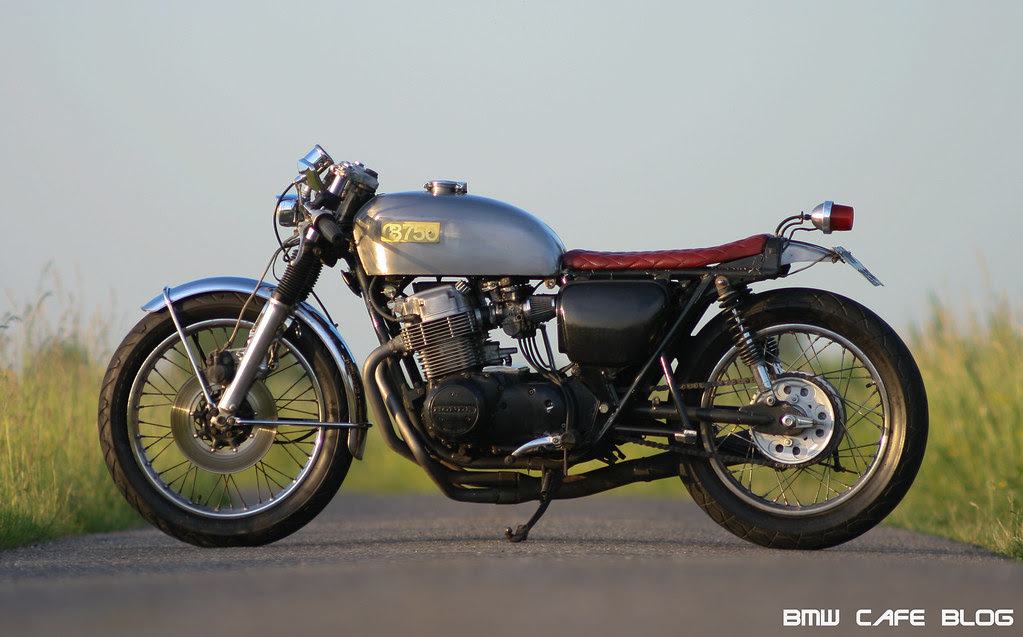 and the current builds: 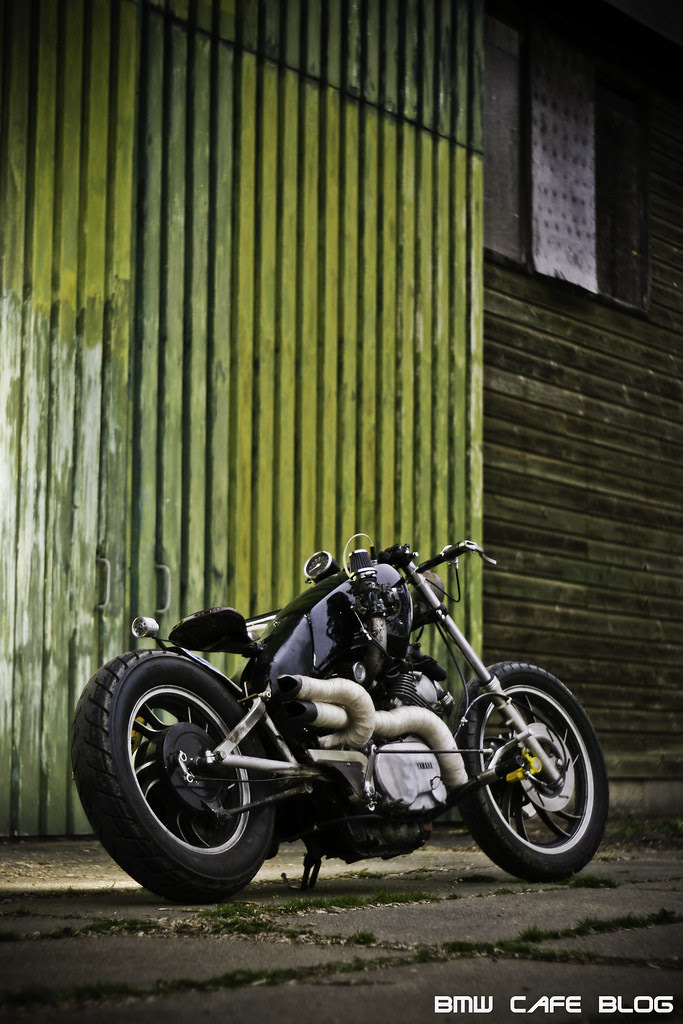 And the next project: A Yamaha SR500 that I will build together with Vincent:

Still have some photo's of the Chopperstyle bike show. These two bikes were placed 3rd (xs650) and 4th (CB750 SOHC). The XS is not really my taste, but it is very well build by Jacco from Short Cut Choppers 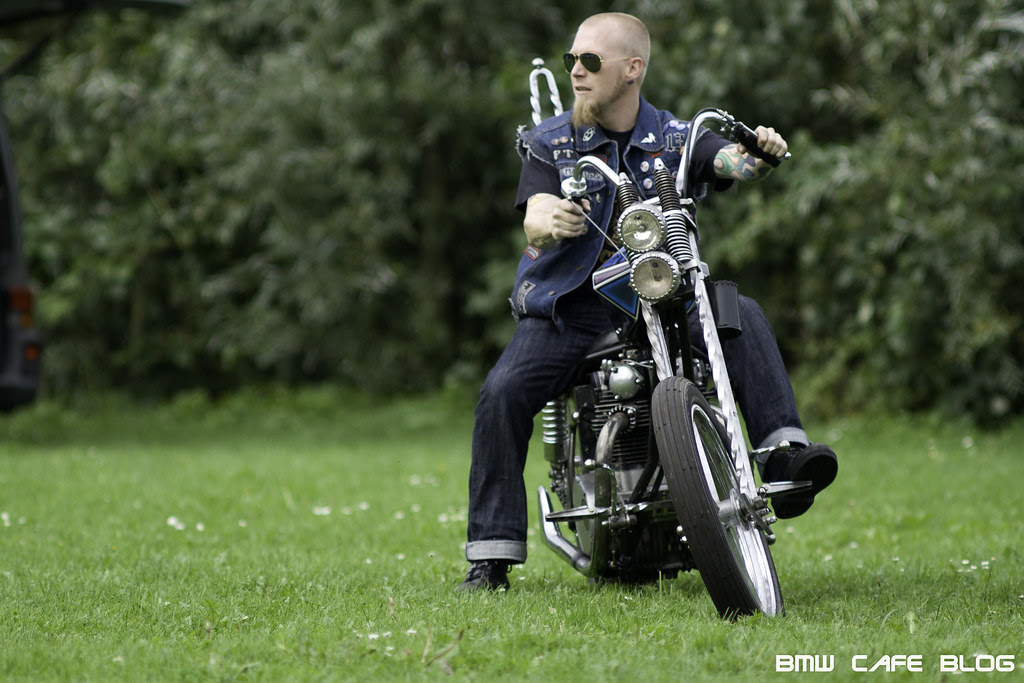 They are having an opening party of their brand new shop in Ede (the Netherlands) this Saturday. 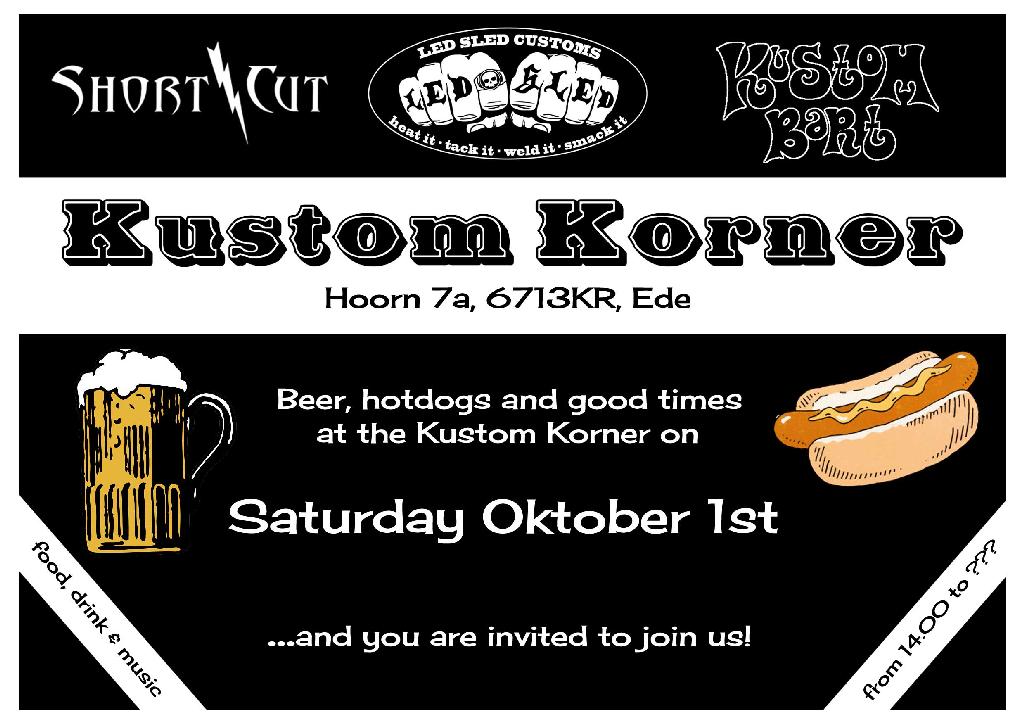 The CB 750 SOHC is build by Gozewien. Apart form the paint, he did everything himself. It's great to see a bike that is so different from the usual CB mods (including my CB). Some great details on that bike! (Check out that exhaust!)

Working on the Virago

It's something we do jut about weekly, mostly in the evening. It's in the final stages of the build now. We are tidying things up and doing the paint. Last night was no different. I chose to take the BMW, the train is expensive, unreliable and annoying. Besides that, the weather was great and I had a request for more photo's of the BMW. I found a pretty cool photo location in an old, abandoned stone factory. Sneak preview:

The other photo's will show up later ;)

We've been working on the Virago for about 3 years now.... Sounds long and it is long. That's mostly due to how we work: We're there to have fun. Joking around, trying out stuff on the bike that we already know (but not for sure) that it won't work. And we work on other bikes as well. This is Vincent spray painting a part for his Duc Caferacer:

But if we want to finish it, which we really want by now, we do have to work on the Virago. This is me, working on one of the side fairings:

We managed to do a mock up of the bike with most painted parts, including the tank (it's finished) and the engine. I am not going to show you photo's, they don't do the bike any justice yet. But we think it looks great, and that's what matters.

And the way back on the BMW. Like I said: Magical.

Sunny with a chance of fog

That's what the weather forecast said: A sunny day with a chance of fog in the evening. I took the Beemer again to go to Vincent to work on the Virago. I stopped on the way there to shoot a couple of photo's near an old stone factory. You'll be seeing those later. The way back was magical again. Just me, the BMW and the narrow, dark, sometimes foggy, dyke roads.

I could soooooo much get used to this :)
Gepost door MIOB op 14:42 Geen opmerkingen: 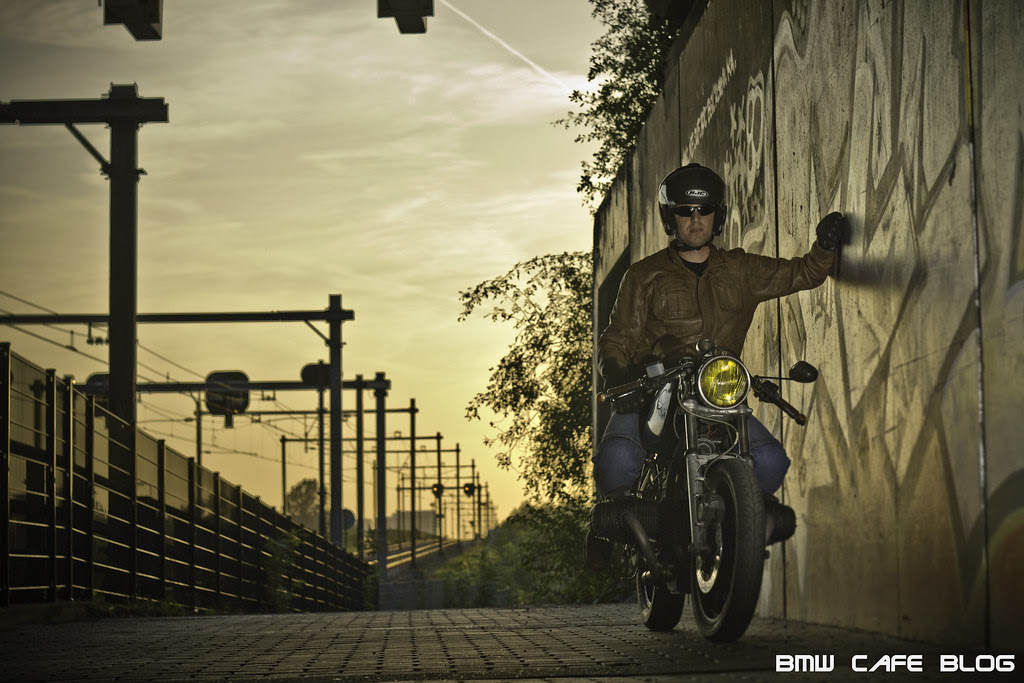 Nice! Again: sooo much to learn :)

Some great pics and editting by Brauchi

Really like the photo's and editting. Great blog too: brauchi's bikes.

Just got home form a mid-night ride on the Beemer cafe racer(after swapping the throttle cables this morning). The trip back from where we work on the Virago should only take 40 minutes. It took me about one hour more than that. Just didn't want to stop riding.
Gepost door MIOB op 14:32 5 opmerkingen:

Prosper is the guy behind anything but stock beemers. He contacted me a while ago after I posted on this blog that I was looking for bikes to photograph. The horrible 'summer' we've been having here made that impossible for a while and even today the weather could have been better (some sunlight would have been nice.....), but I think the photo's look pretty good. For a large part because the bike looks very good :)
Thanks Prosper!!

Made up our minds

We finally decided what color scheme we are going for with the Virago. The tank is already prepped for paint and I took one of the side covers home with me to prep it here. Made it ages ago with a very crappy arc welder, so it needed some work. I know a bucket load of bondo would also have fixed it, but that's not what we want.

Can't wait to see what the Virago will look like.... 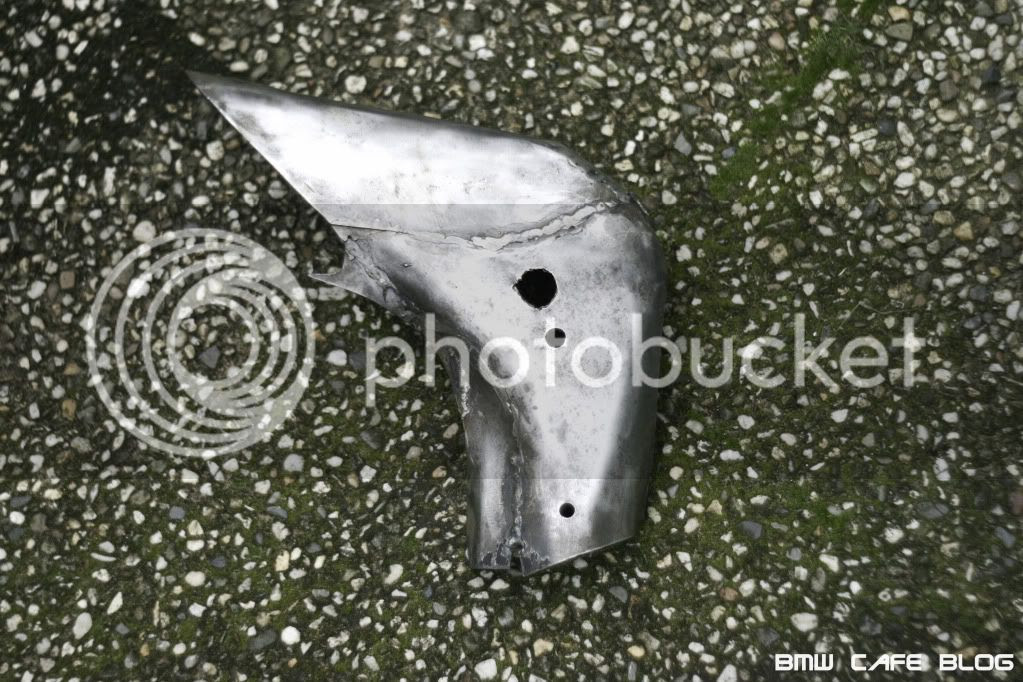 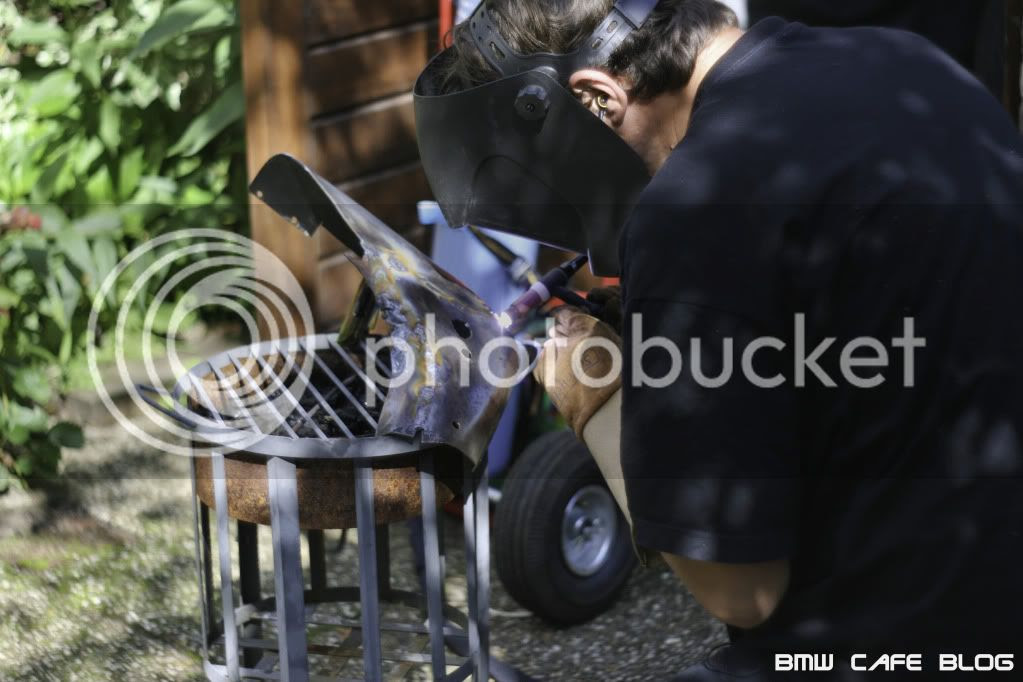 This little 2 stroke got the second place. This one of those bikes that photo's just don't doa ny justice, you just have to see it for real. You'll wonder what we all wondered: What the h*ll has the builder been smoking? 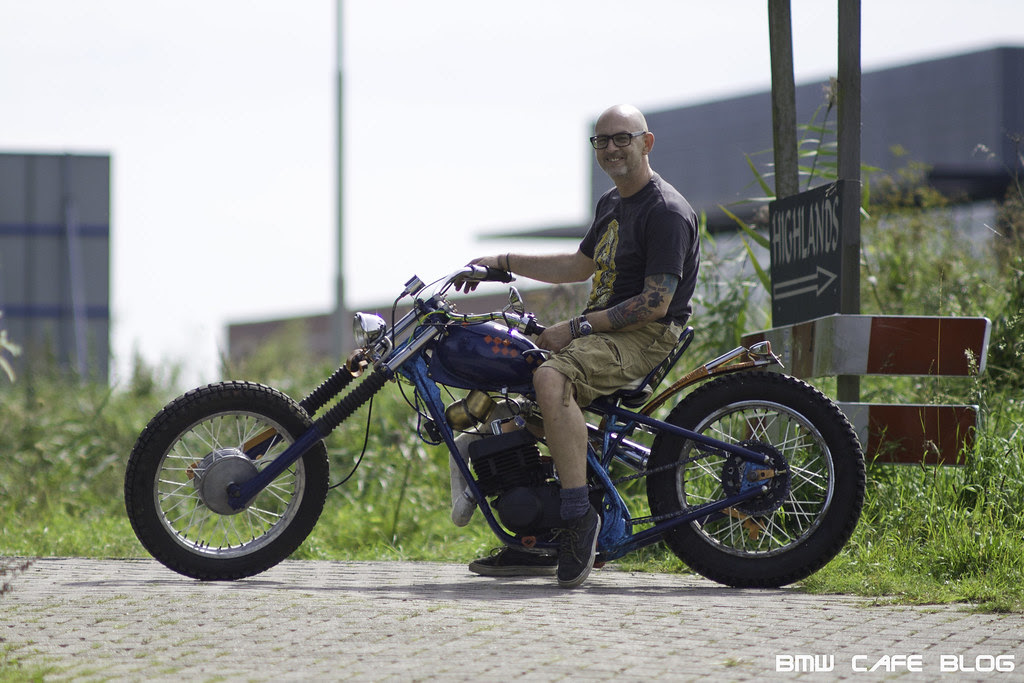 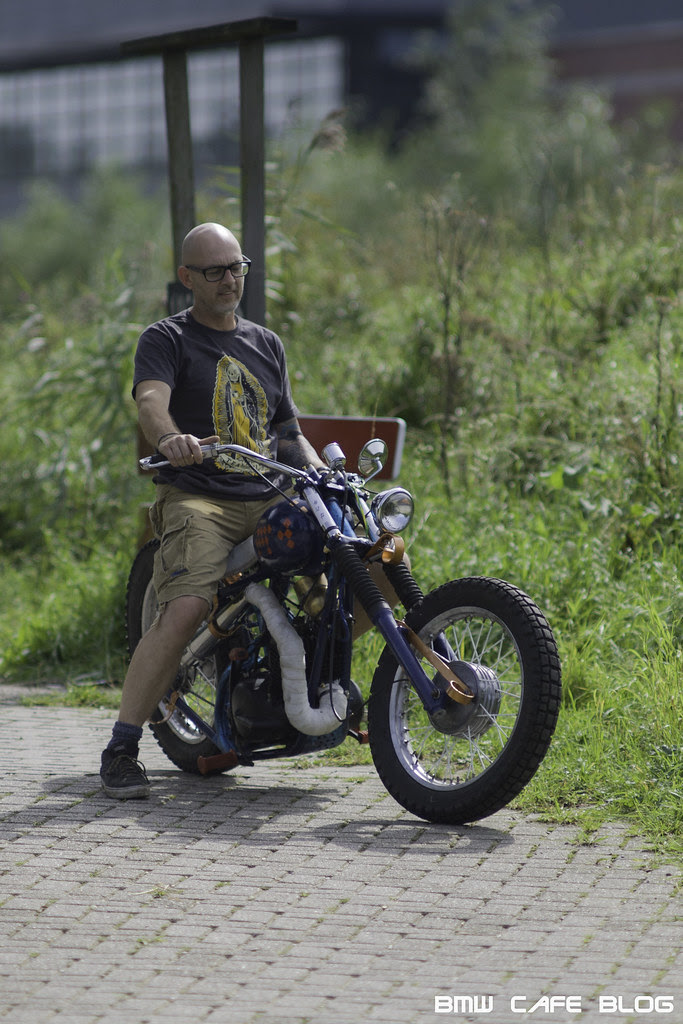 Francesco of Franzgarage send me another email, this time with some more photo's of his cb750 tracker. If I like it..... Hell yes!!! Great job again, very nice photos Francesco, grazie!