Found this BMW on advrider. I hope I'm not repeating myself too much, but: WOW.

One of those quiet evenings

I just love those really quiet evenings. Great for riding.

The tank of the BMW is beyond repair. It's done. With that in mind I just couldn't resist a tank I spotted at the swap meet yesterday. Even though I thought it would be to small and even though it is again a 'plastic' tank.
The first test fit showed it is indeed a bit small:

I gave the tank a quick respray, because the color made it look worse than it is.I also moved the seat up and forward just a bit. Looks better now:

It still is a bit (too) small. I am not convinced yet. Looking at it from the side is the worst angle, from other angles it looks better

I will see if I can find some old header pipes for not too much and build an exhaust like that (with the thermos muffler). Than I'll decide what to do with the tank.
Gepost door MIOB op 11:38 4 opmerkingen:

Swap meets, almost always fun, though not all swap meets are very good. Hardenberg is among the best in Holland, so I just had to go. Bought some nice stuff, more on that later, and saw some nice bikes. This BMW caferacer in particular. Nice!!!

Though I do wonder if he plans on using it to vacuum the roads?!? (see air intakes)

Woody emailed me some photo's of his low budged project. He's been rebuilding it this winter and this is the result: 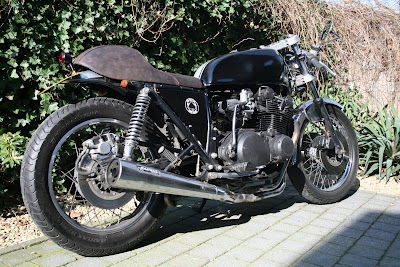 Love it! I hope he'll send me some more photo's, I'd especially like to see more of his cockpit. Very special, very original and great looking.

Chopperstyle is a closed Dutch forum for low budget bike builders. The closed part is on one hand a very good thing (it keeps out highway-hawk Harley riders), but on the other hand a shame. Some really, really nice bikes on there. Member Tim from Belgium has nearly finished his CJ360 and it is exquisite. Very stylish and very well build.
Gepost door MIOB op 01:48 Geen opmerkingen:

Today was NOT a good day.

The start of the day was excellent. Sunny, warm and we had a fun ride planned. Zoran was coming over to pick up his Kawa and he brought a few friends, one of the Lennard from the Bubblevisor blog and one of them Michal, the guy behind this excellent site: site

What could possibly go wrong?

Well, this could go wrong:

Zoran got a nail in his tire. 'Repairing' it took som much time I had to take off straught after, because I was supposed to go to the place where we worked on the Virago to move all the stuff to Vincent's new house. So I took the BMW (Even more fun to ride than the CB).

What could possibly go wrong?

Well, It died. The BMW died a couple of hunderd meters before I got to my destination. A short look in the tank made it very obvious what had caused the BMW to die:

the Tank 'Cure' was dissolving and clogged up my petcocks. Nice. NOT. Also good to know that I had to get back home as well, another 30 miles or so.

Yep, not a good day. But wait, it could still get worse. And so it did.... We loaded all the tools and metal onto a trailer and tried to start the Virago to move everything to Vincent's place. Tried to start it, because it didn't get any fuel. After a quite a while we found out that one of the fuel hose clamps was to tight so no fuel could come trough. So we started the bike and off we went:

That's me on the Virago. I got as far as 7 kilometers, exactly halfway. Then it died. Gearbox seemed to be totally gone and the engine wouldn't run anymore. Great.

We had to go back later to pick it up with the trailer.

So no, today was NOT a good day, although the BMW did manage to get me back home (all be it only just).

I almost forgot that we also made a short vid of our ride with the Virago. Here it is. Nothing too spectacular, but you will get the point :)
Gepost door MIOB op 05:00 Geen opmerkingen:

I am trying to get larger photo's on the blog, so I changed the layout. I like the larger photo's, but I am not too happy with the layout (I am missing the links on the left the most, they are now all the way at the bottom). Not sure if I will keep it this way. 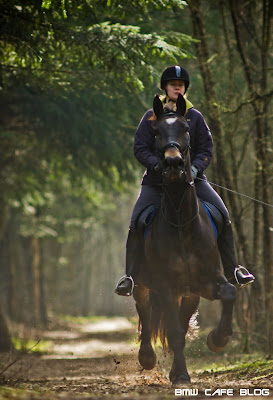 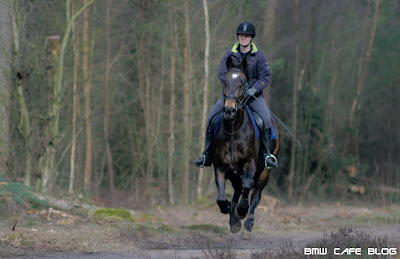 I do some horse riding, it shows that you don't need all that much horse power to have fun ;). My girlfriend rides a lot, I went with her this weekend and took some nice shots (though the light was very difficult to make decent photo's)
Gepost door MIOB op 00:50 Geen opmerkingen:

You might (probably will) remember the excellent BMW R45 caferacer build by Francesco from Italy that was featured on this blog a few months ago. Francesco has now completed another bike. A CB750 tracker. Again a stunning bike, love the seat, love the headlight, love the whole bike. great job again! Keep them coming Francesco!! 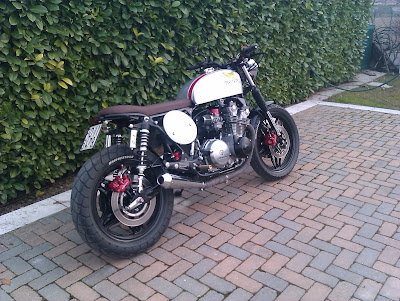 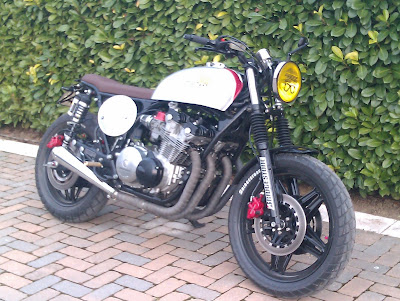 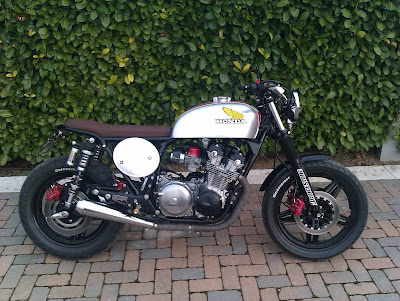 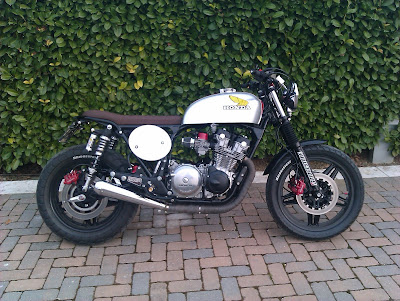 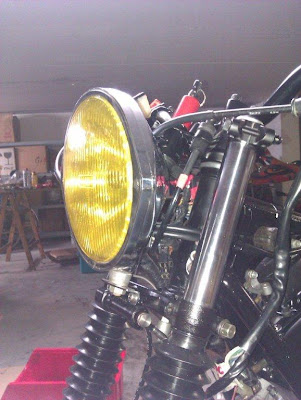 I moved the headlight down a bit, it is more in line with the tank now. Also put some finishing touches on the wiring loom and installed a 'new' brake caliper, that's all as it is supposed to be now too. So the bike is rideable and that was the main goal. Painting and riding it is up to Zoran :) 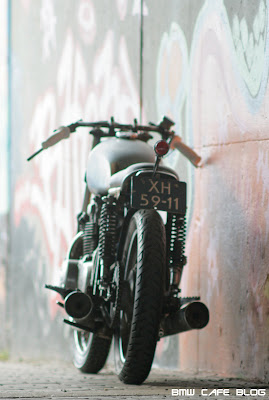 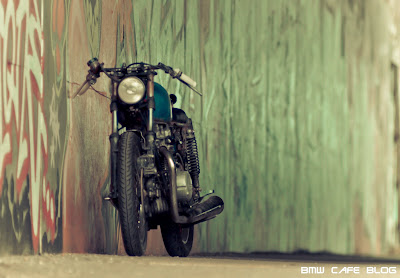 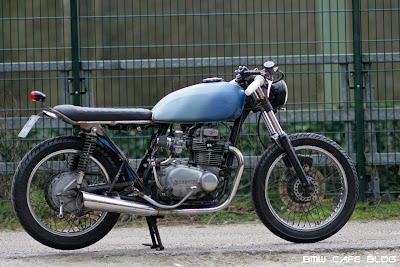 And yet another great Beemer form the south

Incredible. It must be the climate.... But I got another email from southern Europe, from an Architect from Portugal: João. He send me pictures of his first build, a very, very tidy and cool BMW cafe. João, congratulations on your first build, very cool!! 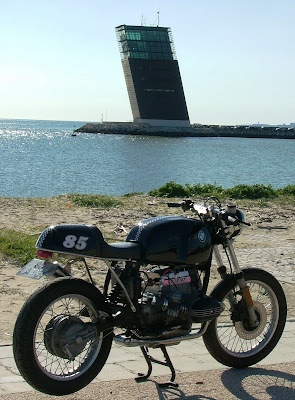 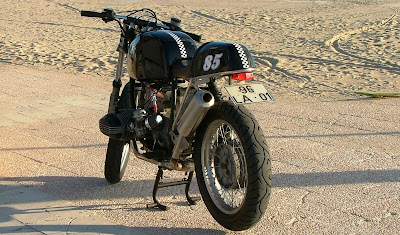 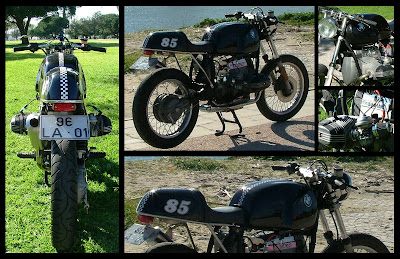 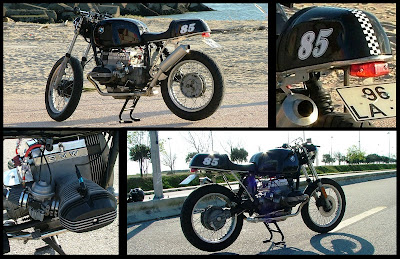 And yet another great Beemer from Italy!

I got another email from Francesco, the guy who build that wonderfull black and white Franzgarage BMW. He send some photo's of his friend's (Marco Lugato from "moto di
ferro") bike. He asked if I like it. I love it!! Thank you for sending the photo's! 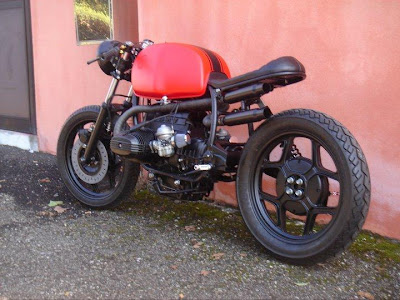 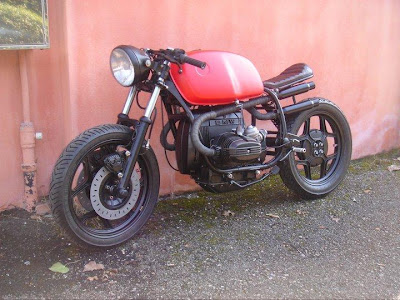 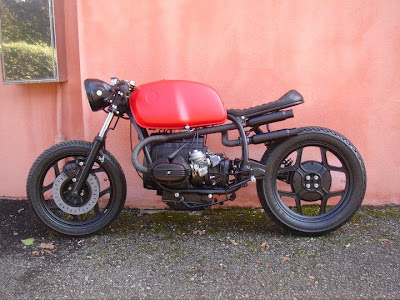 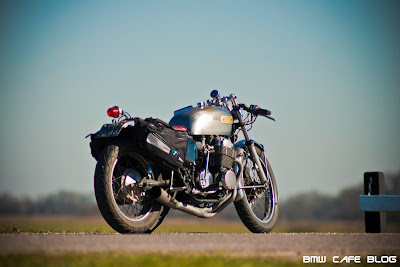 On the Virago. The weather was briljant, almost couldn't be better. So I took the CB and ended up at where we build the Virago (with a pretty big detour). 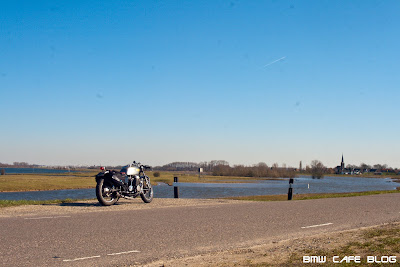 Longest trip on the CB so far by far. It was a very pleasant ride. Also the first time with saddle bags, no problems there either. 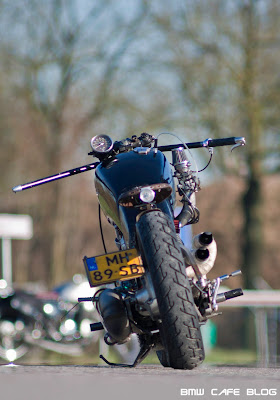 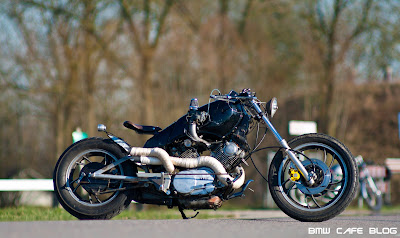 The Virago had a bit of a grumpy start, but was flawless after that. It's pretty fast, sounds loud but very nice, handles ok (ground play is a bit of an issue in fast corners) and was surprisingly comfortable. 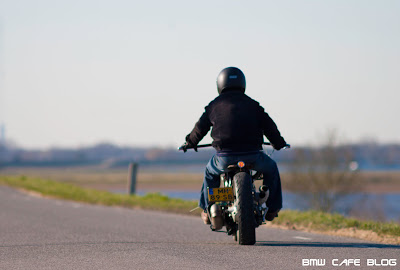